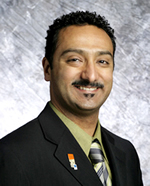 Dr. Kazemi has been teaching at Canadian Memorial Chiropractic College (CMCC) since 1996. At the present time he is Associate Professor at CMCC teaching Clinical Education to forth year student and Sports Specific Subjects to first and second year Sports Sciences Residents. He is also the interim coordinator of Sports Sciences Residency program at CMCC. He continues to be involved in research in Taekwondo Training and Sports Chiropractic. He has taught various continuing education seminars on topics such as ShockWave Therapy, VMTX Vibromax Therapeutics™ Soft Tissue Therapy, Kazemizer Shark™ IASTM Tool, Sports Chiropractic and Rehabilitation.

Dr. Kazemi has been serving as the Associate Editor for the Journal of International Association of Taekwondo research and Assistant editor for the Sports Issue of JCCA.

He has published several scientific articles and research in peer-reviewed journals and presented his research in Taekwondo and chiropractic around the world. Dr. Kazemi is the author of the first complete book on vibration plate exercise programs, “Vibration Plate Exercises“.

Dr. Kazemi, Doctor of Chiropractic,  holds 7th degree black belt in WTF Taekwondo and has been Canadian Taekwondo Poomsae Champion in 2006, 2008 and 2010 to present time. He won gold at the 2008 World Hanmadang Taekwondo and 2015 Canada Open, and bronze medal in Pan Am 2012 and 2014 Poomsae championships.

DoctorK Clinic
5.0
Based on 29 reviews

Meshkat Hosseini
18:48 06 Oct 22
Overall I am very satisfied with the services I received. I... went in with a broken ankle, the pain was extremely painful but with the help of Doctor K I could finally overcome the broken ankle.read more

ben rashidi
13:38 17 Sep 22
I’ve Been to many Chiros. Dr K is very professional,... caring and has a big heart. The receptionist is also very professional and organized. Thank you for you services.read more

Kui Wai LI
01:19 15 Apr 22
I received massage and acupuncture treatment from Dr.K. His... medical knowledge is excellent, and can explain to me my backache problem scientifically. I find his treatment very professional. I have came for the treatment for over two months, beginning with twice a week, then reduced to once a week as I see great improvement. soon, I need to go only when necessary. I have full confident on Dr.K's service and treatment. Really thank him for his treatment.read more

kev cheng
14:09 15 Mar 22
Very Good. Doctor K is very knowledgeable especially... working with athletes. Not only I go there when I have injuries but I also send my students to Doctor K as well. He is personal, very caring, and take his time to make sure his patient gets the best treatment and detail explanation.read more

armin nazempour
05:33 01 Mar 22
Dorcor K is very professional in his career and I had a... great experience with him during my treatment. I had a knee pain for a long period of time and I thought this problem never could be solved but after his treatment plan the pain was revived. Thanks to himread more

Huahua Fencing
18:34 21 Apr 21
The best clinic for sport injury. Doctor K has been helping... my athletes for many years!read more

Rui Lopes
17:43 23 Feb 21
Thank God I found Doctor Kazemi. I was suffering from back... pain for months. Got hurt at work, and I went to many other clinics, and was just getting worst. Finally Dr Kazemi start to work on me. My back recovered in just one month, I feel so good being able to live pain free again.read more

Vanessa Friesen
00:07 06 Aug 20
A sports injury was causing my teenage son back pain and... affecting his training. We took him to several doctors and all of them said it was a deep muscle injury and there was nothing that could be done except allow it to heal on it's own. A year later, his pain had gotten worse and they were not able to do anything for him other than reccomend he pause training for 3 months. My son's trainer reccomend Dr. Kazemi several times and we finally gave him a try. We were not dissapointed. After 6 weeks of treatments, my son was pain free and has been pain free for nearly a year. If you are considering seeing Dr. K, don't wait.read more

Kristian Pal
20:54 27 Jul 20
I ABSOLUTELY recommend Dr Kazemi as I can honestly say he... is one of the best ever in my opinion! He is a kind, compassionate man and brilliant in his knowledge of the body. I suffered from daily headaches and migraines from an accident and was unable to find natural relief until I met Dr K. After years of pain, with Dr Kazemis visits and help I no longer have headaches and finally lead a normal life again. His range of knowledge is amazing and helped me understand my issue and the healing process behind it, as well as provided continual guidance and excellent exercises. Mrs K as well is always very kind and helpful. Thank you Dr K!! If something hurts, let Dr K fix it! Highly recommend!! :)read more

Lorelei Eccleston
00:47 16 Jul 20
I highly recommend Dr. K! I am benefiting from the... excellent chiropractic treatment with Dr. K. He is so patient and always listens to my concerns (aches and pains), even though he already knows the answers:) His treatments are really working and I can tell the difference.read more

Joshua De Pinto
21:13 05 Apr 19
Absolute professionalism from Dr. K. Gives great advice and... even better treatment for his patients. Widely recognized nationwide for his chiropractic treatments. Would not trust going to anyone else but Dr K!read more

P M
20:43 14 Feb 19
Dr.k has helped me considerably with my hearing problems... due to my TMJ. He is such a nice man, who will listen to what you have to say, and do his utmost to help you. His staff are also caring and attentive. I would recommend him Highly and have done so on many occasions. If your thinking of going to see him, don’t hesitate, you won’t be sorry.!read more

Asbed Keskinian
22:23 07 Feb 19
Service delivery, massage treatment and customer service... was exceptional. Dr. K is very knowledgeable and has significant experience in the rehabilitation industry. I have referred all my family, friends and have received positive feedback from them as well. Will definitely recommend Dr. K to anyone with rehabilitation needs.read more

Suzanne Snyder
23:34 06 Feb 19
I am so thankful for Mohsen (Dr K). He does more than many... chiropractors Ive been to. Totally fixed me up more than once. Also applies heat/ very low electrical impulses. Also exercises. Lovely staff! No long waits! I highly recommend him!read more

Natalie Auyang
20:22 06 Feb 19
Dr. Kazemi is the best doctor in his areas of expertise.... When other medical doctors say it cannot be treated - or an athlete cannot compete due to a serious injury - Dr. K has proven them wrong. He has treated my family from growing pains to serious sport-related injuries over the years, and he has successfully helped us every time. He is a kind and caring professional whose knowledge and abilities are nothing short of a miracle. I cannot thank him enough for everything he has done for us.read more

victor ji
16:46 01 Feb 19
Doctor K has helped me tremendously with my Achilles’... tendon. I to be honest wouldn’t know what to do without him. He is so knowledgeable and humble and sometimes I feel like he’s a magician.read more

Myung's Taekwondo
18:59 25 Jan 19
Doctor Kazemi has helped our athletes for many years. He... is the reason our athletes recover quick and performing at a high level.read more

Edward Fong
18:52 25 Jan 19
Dr K has helped me and my athletes. He is knowledgeable... for our sport and is someone we can always rely on.read more
Next Reviews